Glossary |
1. The Guru, accepting all the engaged Sanghas, Officers and surrounding disciples in Bodhi Shravan Dharma Sangha, and having taken refuge in this Truth, the Dharma, the GuruMarga’s (GuruPath)[1] sphere of ascetic practice; I, understanding the extreme urgency of the time, am conveying this message on today’s date to all the disciples.

2. First of all, the Sanghas must have a real understanding such as what is Truth, Dharma, and the Guru? What is meant by GuruMarga (The GuruPath)?

3. All Sanghas must join together with the essence of complete surrender being of one spirit within, keeping to the point, completely accepting the Guru, reciprocating the Maitri feeling; in other words, the connection between the Guru and disciple is joined together with faith, trust, and devotion acting as assimilating links.

4. For those who cannot be this way, questions concerning Guru Dharma (the Guru’s teaching) keep on arising.

5. The Guru himself will take complete responsibility for all the formations of the Sangha from now on as these relationships are extremely sensitive and at times there are bad feelings.

6. As the Guru expands the Sangha, the Dharma will be spread, not a throng of people, otherwise the Guru Dharma cannot be assimilated and arising adharmic [2] questions can never be answered.

7. That which has been spoken today until this point, every second, every time, was not able to be steadily conveyed, even this very speech and message from the Guru.

8. Years having gone by, the True Guru is in front of you.

10. There are states of mind indulging in defilement where behavior and sentiments are displayed with jealous feelings feeding the ego for the sake of status, name, fame, and reputation.

11. The Guru who comes embodied as the True GuruMarga is not even able to be seen, and, after ages, the preaching of the True Dhamma is not even heard.

12. Being called Sangha, one must be as a beacon of light, of one form and one feeling, without defilements, favoritism and discord.

14. When the Guru arrives nearby, what state of mind should one be in?

15. What purpose and aim must one have?

17. The Sanghas have to be able to realise the Guru’s dignified, celestial, peaceful, calm and seemingly controversial presence.

18. With absolute dedication and faith, one has to completely accept and heed the Guru`s presence and eloquence by denying one`s own worldly logic, analysis, deceptiveness, sorrow, suffering, and mean intellect. There are hardly any true disciples or Sangha who are aware of the self and the value of the time at the moment of meeting with the Guru. But, as I see often, disciples or the Sanghas do not know themselves personally: where they are or which state and position they are in.

20. But again, believe the Guru and you will follow the form of the Real Sangha in front of the True Guru, and you will be freed from the worldly ocean of illusion.

21. Otherwise there is no other alternative. The Sangha is expanded only on one out of two paths: is it the True Path or the False one? Only the highest standards will fulfill the Dharma.

22. But Purity and Essence are not with a quantifiable form, it is the quality of their form that keeps the Essence animated.

23. To this end, I have been giving all of you these precepts to assimilate and understand.

1) Never break oneness and equality on account of name, appearance, ethnicity, tribe, religion, colour, class, gender, belief, community, nation, power, position, ability and so forth; this means, give up all discord, be it worldly or spiritual.

2) Having found the eternal Dharma, Margapath and the Guru, remain respectful to all religions and beliefs.

3) Never cause rifts or doubts with untruths, accusations and counter-accusations, belittling or meaningless talk.

4) Resist all teachings and paths that lead to separation, rifts or boundaries; stay steadfast in the true marga-practice.

5) Resist doing even the least harmful karma-actions throughout life in true Gurumarga practice, melt totally into Guru’s truth-nature, becoming part of it.

6) Before being truly merged in the essential realities and practices of Gurunature and Dharmanature, refrain from expounding it with clever words; while still mired in hearsay, rumour, and propaganda, do not draw others into delusion.

8) Do not think less of people or countries on account of national identity.

9) Rooted in true Gurumarga practices, dedicate all karma-actions, thought and speech to the uplift of the whole world, including ourselves.

10) When searching for Truth, the Gurumarga path begins to take form within the heart and merges with Gurunature for the wellbeing of all life in the universe.

11) Remain always in the highest and deepest awareness, realising the various precepts in the soul, gaining freedom from all bygone bondage and constraints.

25. To cultivate the precepts of the GuruMarga, the Sanghas adhering to the path of True Dharma accomplish their responsibility and duty towards the Guru, the Dharma, and the Sangha with complete dedication. To expand the Sangha of Maitri free from defilement, one has to be determined; none other than by embracing this path will the Sangha be welcomed. For empowering the authorisation of the expansion of the Sangha and Dharma, the Guru is delivering the Dhamma Letter certified by himself.

26. The duration of this Dharma Letter must be re-certified every three months, and this Dhamma Letter has the powerful nature of bracing the extremely delicate – so much so that it can also be weak – bridge of faith, belief and devotion.

27. All Sanghas depend upon themselves. Just as by doing virtuous deeds by following the GuruMarga one is able to be freed from bondage, in the same way by doing the opposite, one experiences the exact opposite result.

28. Having said that, in the True Dhamma’s supremacy wrong words cannot be supported at all, but only because of the Guru Dharma is this opportunity obtained again today. Believe the Guru and the Sangha will get the complete benefit of this opportunity. Also, with this, I am informing all the Sanghas that from this date of 2068/10/14 (2012/1/28) onwards, reserving all the rights of the Sanghas’ present expansion of each Sangha, construction work, promotion and advertising, and spreading messages and notification in Halkhoria`s central office, all such works are to be performed by the workers of Halkhoria alone and only from the statement of the Guru.

May all be loving and calm, so be it.

[1] Here GuruMarga is put together in the original text, although devanagari letters used to write Nepali makes no distinction for capital letters. As the postposition "ko" indicating the genitive case is not present after Guru, the phrase has been translated as "Guru Path" over "Guru's Path." As it is without space in between, it has been translated as a compound noun. Compound nouns are written either with a hyphen in between or without a space. The translators have opted for capitalisation of Guru and Path to emphasize them, and for no space for easy reading.

[2] Adharmic means “outside of the Dharma” or “against the Dharma” as the prefix “a” in Sanskrit is the equivalent of “un” or “non.”

[3] Tattva तत्व (n.) base, center, centre, core, element, essence, gist, heart, heart and soul, inwardness, kernel, marrow, matter, substance, sum, the gist, metempirics (The concepts and relations, which are conceived as beyond, and yet as related to, the knowledge gained by experience) http://www.pelagiandictionary.com/roman/Aese%20tatvagyan%20se%20sambandhit

When Tattva is used with the verb “prapta garnu” (to achieve), it indicates Enlightenment.

[4] Sheel – a precept or moral which although expressed in the imperative form are not quite as much a commandment as a continuous aim or goal for the focusing of one’s conscious behavior and habits. 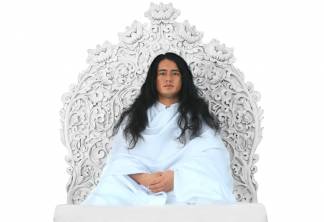 No authority in any world has the right to declare against True Dharma. At the right time, responses to the objections will be given to the Universe...