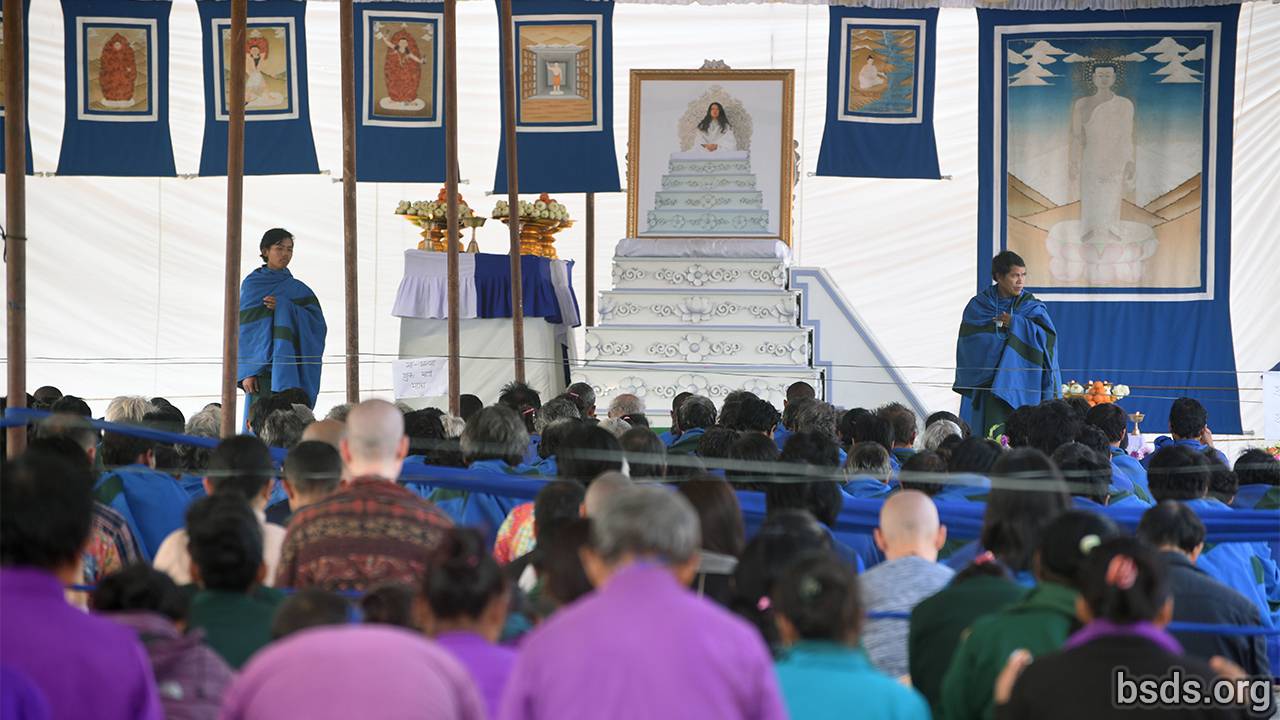 February 6, 2019 2047
A brilliant three-day World Peace Maitri Puja was held in the Sindhuli Maitri Dharma Centre to celebrate completion of three months’ arduous spiritual training of the 200-odd Maatma men and women. Called MaatmaGuruMarga Athoahas and Maatma GuruMarga Tapowa in the Maitreyan language, they had gone into Maitri meditation of three months’ intense probing in isolation and silence, nurturing the single overall Maitribhav for the transcendence of all living beings and peace of the world. Housed in total isolation, in individual make-shift huts dotted around the hillside of the Precinct jungle, they spent the three months entirely alone stretching deep within to reach the Paramatma Gurus above. Throughout these austerities, GuruMarga Gurus were in attendance at all times preserving peace in the jungle. 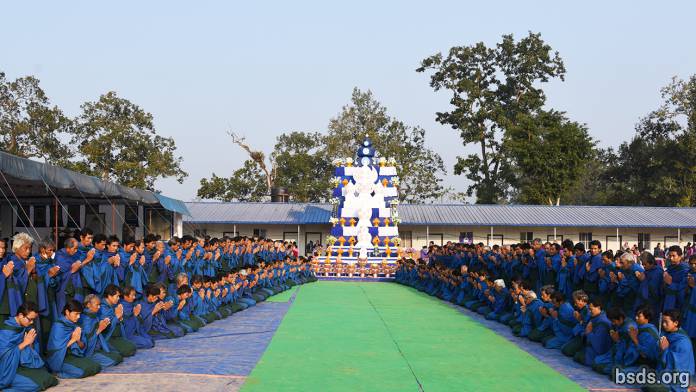 Maatma gurus are the chief, the root-gurus for all secular GuruMarga gurus, that is, secular followers of the Maitri Guru Path. Throughout life, the Maatma Gurus will be empowering secular devotees with confidence, support on the mukti-moksha path, and through their deep-rooted confidence, the devotees will obtain instructions leading to the highest realm in paradise. Maatma Gurus are the peaceful light of the world endowed with full wisdom of Maitri dharma. They are the blooming the dharma blossoms of the world, disseminating the dharma fragrance from homes, towns, villages, country to the whole world, they are the main gurus planting true dharma on earth. Experts in all human daily actions, they will personally steer the energies of each of us onto the most effective mukti-moksha path.

Amazingly, most of them emerged from their long austerities looking far younger and healthier than they had been last October upon first arrival. Now vitalized, immeasurably empowered and deepened in wisdom, they have also somehow cohered into one glowing group even though in uninterrupted isolation they had not spoken a word to each other throughout these three months. 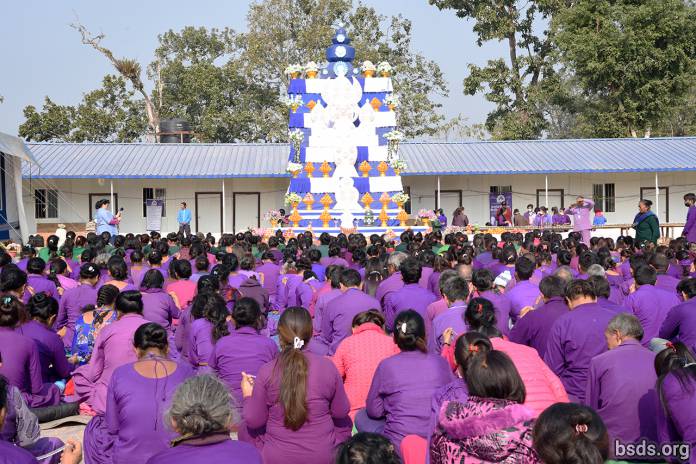 For the celebratory Puja in the Sindhuli Precinct, Nepali Sangha members once more erected the towering brick altar of offerings to the Paramatma Gurus, as in the MaitriDivas Puja of last March, each layer with offerings of fruit trays, and colourful flower pots festooned around the iconic giant wooden offertory Maitri forms with the largest, blue MaiMaitri offering, poised at the very top. Devotees do their 21 prostrations in the large ground-tarped space before the open altar, and the huge Nepali Sangha gathered from all over the country sit here during prayers and meditations. 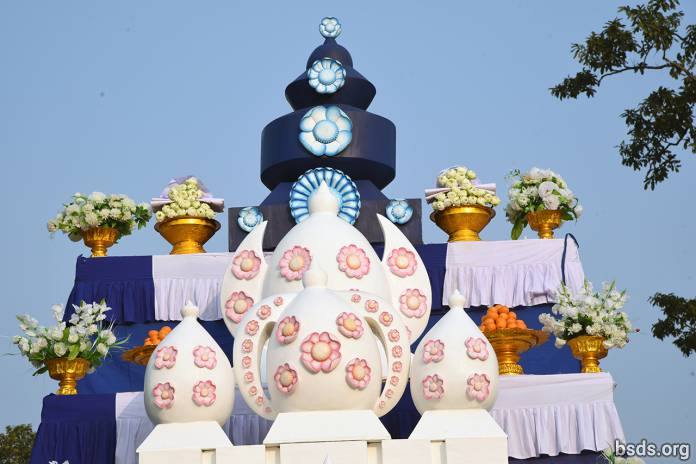 In the giant blue-and-white covered puja pavillion next to the open altar, the Guru’s white wooden throne carved with flowers and plantlife dominates the low altar platform at the front with a large photograph of Guru on top, flanked on both sides by hanging images of the eight Paramatma Gurus. The Puja is conducted by the Maatma gurus who kneel and sit facing the altar, with the low-voiced Maatma Guru Athoahas leading the chant seated in two rows at front left. Behind them are the women Maatma gurus or Maatma Guru Tapowa, followed by the rest of the men, the Maatma Guru Athoahas. Filling the back are international sangha from China, Russia, the Americas and Europe with Chinese devotees making up a large number, coming as they do not only from China and Taiwan but also from America and Europe. 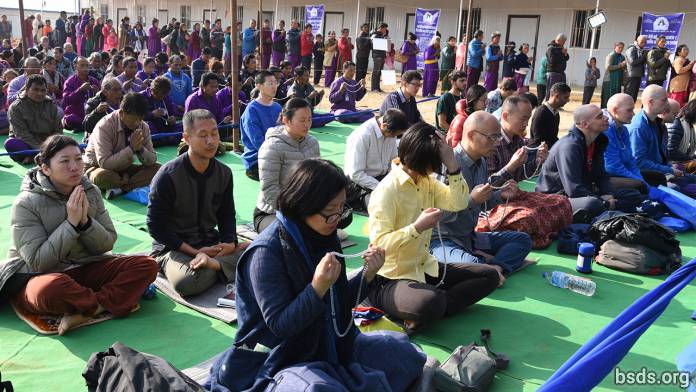 Many world-wide devotees had arrived only a day or so before the puja and are housed in the newly built International Dorm a ways down the hill, and as well as in dozens of individual tents dotted over giant ground-cover tarps, beneath tarps overhead protecting from any rain. Older devotees are jovial in spirit and filled with excitement to be back; those arriving for the first time are filled with wonder at the simplicity of life here that at the same time is so intensely transformative in spirit and outlook. 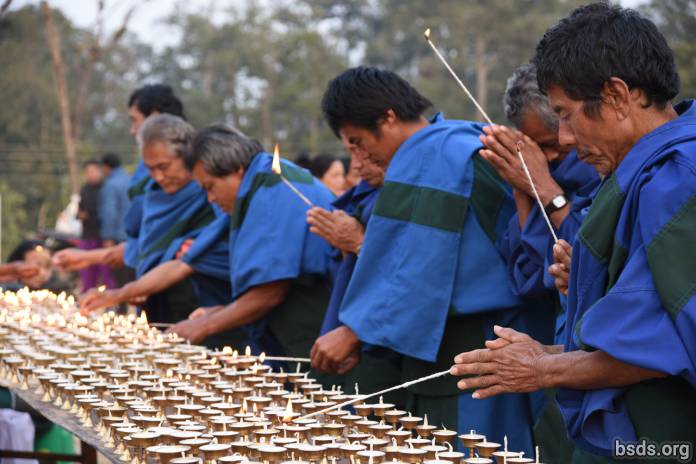 Outside, next to the two altars, are two long rows of tables with a thousand oil lamps lit and waving in the dimness of dawn. Devotees line up to light one lamp each. Bowing their heads, they pray from the bottom of the heart for peace in the world and the liberation from all suffering and cyclical rebirths for all living beings. Some light a lamp in special dedication for a loved one while reverencing the Paramatma Gurus summoning all the Maitri bhavana from the heart for this spiritual connection. Seated on the ground close by, a group of women volunteers spend the entire day collecting the used lamps when the light has gone out, cleaning it inside and out, polishing it with a rag, then reverently refilling each sparkling brass lamp with a cotton wick and vegetable ghee oil. These are then placed on the table ready for the next wave of devotees to light their lamp for the day.

As we light a lamp, we are offering up myriad thousand times their brightness, white as the light of the sun for the release from suffering of all living beings, as our heart soars in full Maitribhav to the fragrant lotus feet of Paramatma Gurus. We pray for all living beings, and under certain circumstances we may also bring to Them our loved one for blessing. But as long as the light remains lit, the heart must remain pure, pristine without the slightest negative thought so that our offering may be received above in its entirety. The instant we deviate from unsullied devotion, the immense spiritual value of our light offering vanishes and, in its stead, negative values will colour our karma and hugely diminish our punya blessing. Thus are Maitri devotees reminded to keep vigilant at all times, lest we stray from the path of Maitribhav. 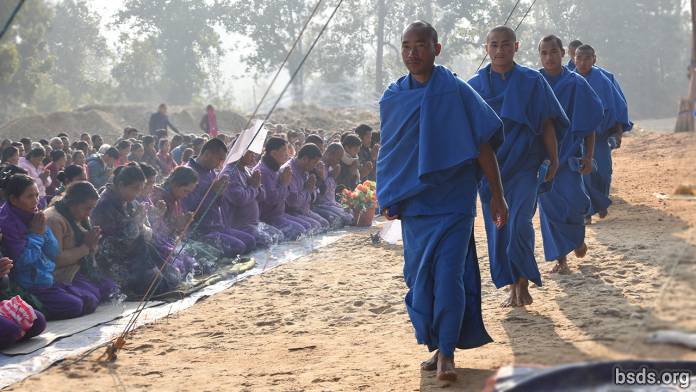 The day begins at six when Gurus and worldwide devotees gather in the covered pavillion and the seven Maitreyan Mantras is broadcast. When everyone is properly seated, GuruMarga Gurus enter from the back, walking slowly down the central aisle toward the GuruThrone at the front. Now worldwide devotees, Maatma Athoahas and Tapowa on both sides of the aisle turn toward the centre and kneel down in reverence to bow to the GuruMarga gurus as they pass. One by one, the GuruMarga Gurus approach the altar, reverence the Guru Throne, and take their seat in front. The Maatma Gurus’ deep voices chanting daily prayers and mantra incantations act like a powerful magnet, drawing everyone deep into meditation as we sink into prayer or mala meditation, the heart reaching upward. The altar platform is guarded by two Maatma gurus at either end of the Guru Throne, guiding devotees coming up to reverence the Guru image. They stand upright throughout their shift. 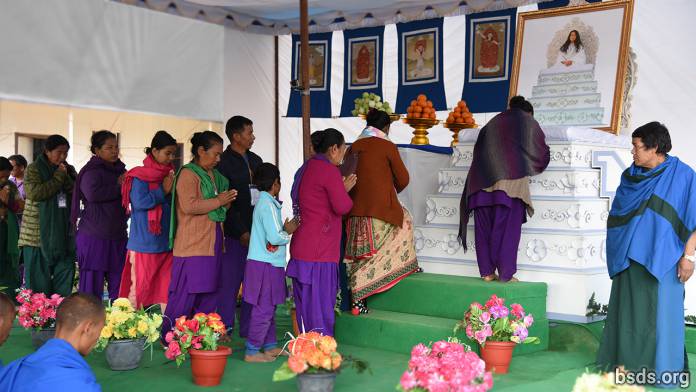 Thousands of Nepali Sangha members from all over the country file in long lines, come forward to the Guru Throne for blessing, touching their forehead on the Guru’s white cushion. 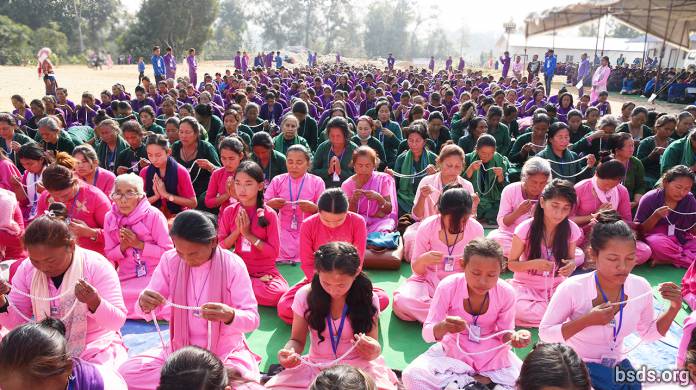 The women are especially colourful this year, wearing long-sleeved, scarved outfits in long skirts or long pants not only in the light pink assigned last year, but many have chosen to wear the men’s purple colour, as well as the new green of this Maatma Guru year, some also outfitting their children in pinks, purples and greens. Silently they file in from the left, reverence the throne and exit from the right to sink back in meditation by the open altar, or return to their homes near and far. 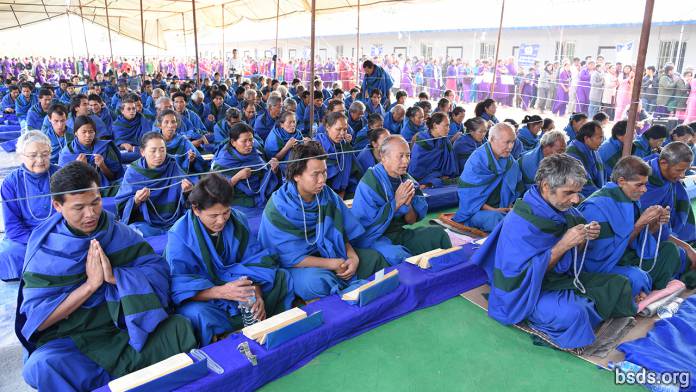 Inside throughout the day, kneeling or sitting with the Maatma Athoahas and Maatma Tapowa, we feel the intensity of their deeply grounded yet soaring energy. The Maatmas having undergone three months’ uninterrupted probing meditation without a break, now charge the entire puja space with palpable zinging vibrancy. A strange tingling sensation streams over the whole back as all hairs stand on end. The heart listens more acutely, awareness sinks more deeply, rising higher, marvellously energised. These Maatmas are Guru’s first wave of Secular Teachers. They are the first Maitri gurus to have been trained by Guru Himself in person and in detail over a period of several years, and they can now teach all seekers directly, with full first-hand knowledge and experience of the Maitri Guru Marga path. Through their Maitribhavana they are in direct contact with Paramatma Gurus and, being near them, we feel as if we are before the Paramatmas Themselves. This is an incredibly awe-inspiring experience for us all. Now the conjunction of Maatma gurus and the Paramatma Gurus in the same great Puja Tent brings everyone present into a different dimension. Even the most insensitive person feels transported and transformed, getting as it were a taste of Heaven, drenched in the nectar of Matribhavana right there seated on this stretch of earth out in the jungle of southern Nepal. Guru Himself is not officiating yet His divine Presence everywhere is overwhelming as it emanates so powerfully from the Maatma Athoahas and Tapowa. 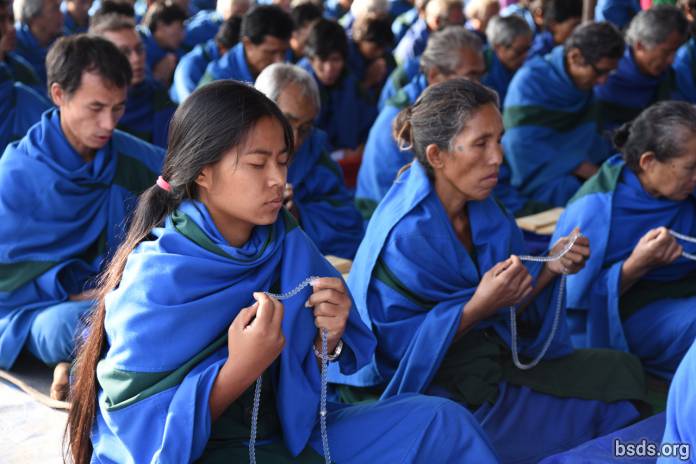 As the chilly dawn hours pass, body heat rising from gathered devotees and gurus reaches the giant cold blue-and-white tarp ceiling above, condenses, and comes back down as large drops of water. Splish! Splash! They dive down, exploding on heads and shoulders, sending sprays all ‘round. We shift position, moving away from targeted wet spots. But the Maatma Guru Athoahas and Tapowa do not flinch. To them water is the breath of the Paramatma Gurus and rains their blessing. They do not budge. As drop after drop of water crashes on their person, they remain steadfast, wholly absorbed in prayer or mala-meditation, moving the beads briskly from one hand to the other without interruption or change in rhythm. While we grope at these invisible gates of sadhana spiritual practice, they, our new Teachers filled with Maitribhavana, are already deep inside the sacred realm in serene communication with the Paramatma Gurus and wholly transported into the other realm, oblivious of physical conditions here.

Today the world has gained hundreds of new Gurus. Before this, there had been only one giant plant, Mahasambodhi Dharmasangha Guru alone. Now that immense tree has created hundreds of flowers in full flowering, as hundreds of thousands of secular sangha devotees and secular GuruMargas are being created in turn. Never before in history has humanity been so massively and thoroughly blessed from above. Indeed, we live in a most auspicious time, being kindled by the brightest divine Light that has ever descended upon this world. 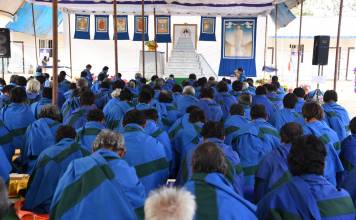