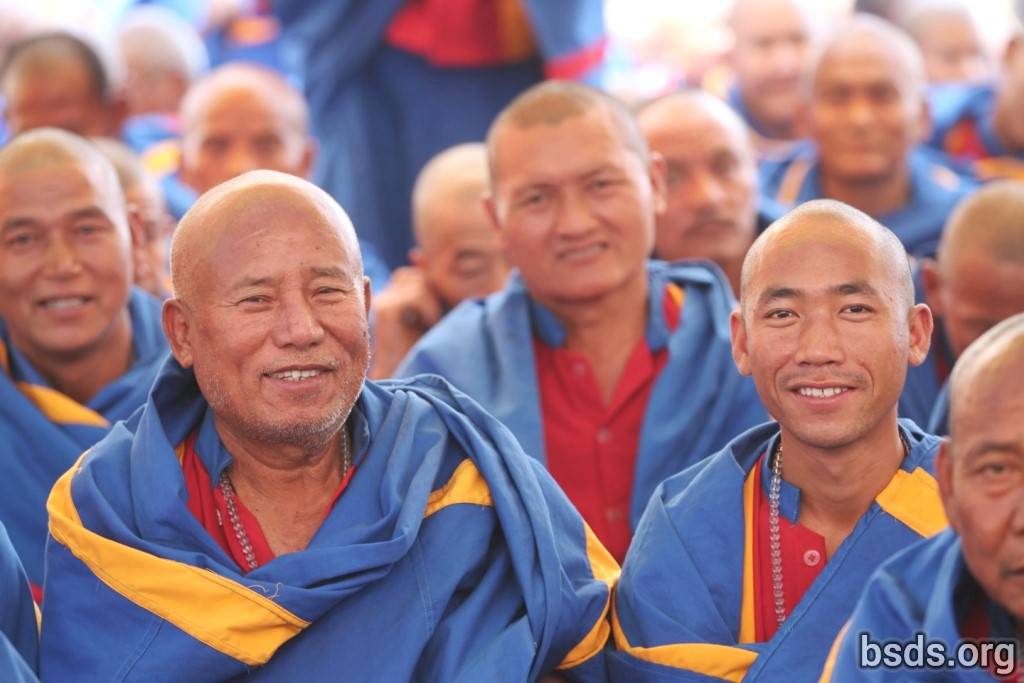 June 5, 2016 3246
Over the millennia and ages past many human traditions and policies have institutionalised violence and brutality. From cruelty toward animals, mass-slaughter of humans, to destructive pillaging of the planet, human ignorance and greed have created dogmata and laws that are bringing the world to the brink of self-destruction. In this eleventh hour, Nepal is generating a new way of life in a quiet grassroots reform. The new messengers of peace called Maatma Marga Gurus, are directing this groundswell as part of the 21st Century Maitreyan phenomenon.

For more than five weeks continuously at the mountainous Maitri Dharma Centre in Todhkebari, Badegaun in the Spring of 2016, an intense synergy of solemnity mixed with celebration affected everyone there as over a hundred Maatma Marga Gurus gathered from many regions of Nepal for their initial studies and preparation under the Mahasambodhi Dharmasangha Guru (the Boy With Divine Powers, subject of the 2006 BBC Documentary that had brought the world to Halkhoria.)

Fomerly local lamas, many of the new Maatma Marga Gurus had been those originally in careful attendance as the then-young meditating Guru sat in the Pipal tree for his historic meditation, surviving alone in the jungle without food, water, movement or sleep for six years uninterrupted, taking on the suffering of all mankind for their liberation. From those early days to this, these devotees had been yearning for Guru’s direct teaching in order to be well qualified to serve mankind. Now wearing robes of Maitri blue brightened with Maatma Marga stripes, this their greatest life wish is being fulfilled, and far beyond their original imaginings.

The term Maatma (Maa+aatma) means Earth’s Soul, and by extension it may be perceived as Light of the Earth; Marga means path, and theirs is the first spiritual practice of its kind in the world. Following the Earth-Light Path, the newly trained and initiated gurus will disseminate loving compassion of Maitri-bhav or the Maitreyan way of being throughout their life. They shall have the ability to be gurus to all people. Having renounced former allegiances to all Old Paths and practices, they now live in Maitri universal compassion and equality, never to cause the slightest harm, to love all living beings equally without bias or separation based on cast, gender, nationality, position, ability or the like. They will teach people to serve the planet, retrieving the binding love of primordial oneness that had once existed before differentiation caused schisms. The aim is for people to gain greater ecological awareness, to experience their unique role on Earth, become familiar with the Earth’s many natural resources, especially the herbs to potent and so abundant in the wildernesses here, to coexist with all other beings living on it and in it in symbiotic harmony.

Maatma Marga Gurus are the first messengers to spread Maitri Dharma in Nepal and, eventually, throughout the countless other countries in the world from many of which truth-seekers have already begun to congregate here. Including both householders and single persons (men and women are equally welcome), the new gurus will serve in towns and villages to perform different functions, abiding strictly by Maitri guidelines: they will not demand exorbitant fees, they will teach people not to eat or sacrifice any living being from the sky, land or waters; nor will they be cutting down trees in acquisitive greed, but cull selectively and sparingly only as needed. They will launch reforestation wherever and whenever possible, planting trees in all devastated areas of this ancient land so wounded by the recent earthquakes. In rituals and ceremonies the new gurus will abolish wrong, wasteful or harmful beliefs and practices accumulated over past millennia, whether in mourning or in celebration. The aim of their ministry is for this planet, beginning with Nepal, to regain her health and wholeness, and for humans to reactivate their symbiotic oneness with the world.

For instance, the traditional forty-nine-day mourning period following a funeral will now continue for seventy-five days punctuated by praying sessions between five AM and five PM on certain days. Throughout these months the family will conscientiously work for the purity of their Maitri-bhav, the Maitreyan ways of being. There will be no consumption of alcohol or tobacco, meat, fish or seafood, nor performances of harmful drum-dancing or soul-snatching. Instead, energies will be drawn upwards to steep in Maitri compassion for the pure and peaceful passage of the departing soul. Family members pray for its total liberation from any further rebirths and to enter the realm of eternal bliss. At the same time they pray for the liberation of all other living beings in the whole universe. To help a beloved soul in its Journey of ascension, family members themselves must attain the greatest purity possible, as any tears or intention of holding on to the beloved will only obstruct their passage to heaven, in fact any defilement will impede the soul’s journey in harmful ways. Family accordingly will live in watchful purity and compassion, growing ever more in Maitri-bhav.

On the day of their departure from Guru’s Dharma Centre they came first of all, more than a hundred strong, to the city of Kathmandu where well wishers lined the streets happily shouting Maitri Mangalam and offering kathas, water, refreshments in happy welcome. Throughout Nepal towns and villages have opened doors and hearts to receive their Maatma Marga gurus, proudly celebrating with feasts reflective of the new order. Among the new gurus are former Sangha Presidents like Suk Bahadur Tamang of Chitwan District who just handed over his gavel to new incoming President, Mansubbha Tamang. In many ways fundamental change is underway as families and friends undergo shifts in lifestyle starting from simple daily practices. Gone are traditional ingredients of garlic, onions, chives and turmeric along with all flesh of hot and cold-blooded animals, milk, or honey. In clothing, silk will be renounced to protect the silkworms in their cocoons. Gone are tears of wailing or crying, genuine or commercially performed, as crying would affect the departing soul in a harmful, negative way, blocking if not preventing altogether its progress in ascension. Mourners learn instead to nurture the purity of heart needed to bless the departing soul with unconditional love, to send it onto higher realms in calm, in peace and joy. Now people will gently accept death with gratitude, as physical death is indeed Gateway to the soul’s release from suffering in this mortal body. Deep calm is gained and spread from better understanding of the soul’s eternal journey. Family members will replace the sadness and wailing with peaceful parting, stressing love and purity to create a beautiful warm sendoff for the beloved departing.

Death is now understood as the important beginning of the soul’s journey to eternal liberation and bliss, and our lifetime on Earth (in human form or that of any living being, be it elephant or flea) but a tiny blip on the eternal life of the soul. Many Maatma Marga gurus remember their first Maitreyan funeral some years back, and the profound calm that had surrounded the Dharma Sangha Guru as he conducted the rites, lit the flames of the pyre and blessed the departing soul now headed toward Mukti and Moksha (final liberation from cycles of rebirths, ignorance and suffering). Everyone present had felt drawn inwards, flooded in an ocean of peace and benevolence as a giant gentle light of blessing descended from the skies, warming the hearts of all those witnessing the uplift as the loved one moved from death into eternal life.

Marriages become Maitri Unions where couples are joined not only legally and socially, but spiritually, as they become one single love energy surpassing the sum total of the two parties combined. Their paths will be unified, empowered as they gain responsibility one for the other, and their lives in Maitri will blaze like a beacon in the community. From birth through death, many Nepali families will experience a leap in ecological and spiritual growth. 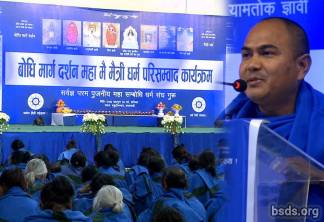 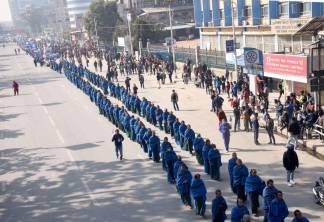 In a burst of exuberance and devotion, thousands of Maitri devotees took to the streets of Kathmandu early in the morning of 29th February, to share their...